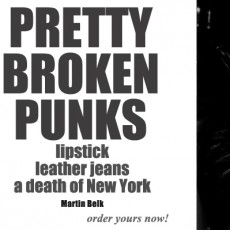 “Full of great memories, names, observations. It brought it all back. Don’t change a word…”
—MICHAEL MUSTO, The Village Voice

“A lithely written, honest and perceptive account of a unique time.”
–IAIN BANKS
30 May 2012, author: Stonemouth, & The Wasp Factory

“Belk reveals a Beaudelarian sense of the city and a profound and burgeoning poetic power and sensibility.  He may not know this–I’m telling him.  Pretty? Perhaps.  Broken?  No more.  Poet?  Indeed.  We will read much more from this writer.”
–LORD GAWAIN DOUGLAS
(great-nephew of Lord Alfred Douglas, Oscar Wilde’s ‘Bosie’)
6 June 2012, author of Fortuna

What’s it all about?

Don’t get me wrong: at its grand finale, our club was just as big a spectacle as the day it opened. On the moist Friday night of April 15th 1994, my friend Blair and I threw our leather MC jackets on stage beneath Misstress Formika’s six-inch heels as she belted a rousing ‘you gotta fight, for your right, to be queer’ to christen the joint. Just four months after Rudolf Giuliani raised his iron fist to be sworn in as Mayor of New York City, SqueezeBox! raised itself on Spring Street ― and would outlast Rudy’s reign in Manhattan.

Every Friday night for a decade the crowds came, and came, and kept coming. They converged for a rock scene I took for granted as the only place in the world to be. Black outfits at midnight, guitars screeching til’ dawn, glitter in your breakfast cereal. Torrid affairs before, during, and after. Those of us who worked there lived it, created it, and made love to it. Counter-culture became our career. This was good for me, most of the time – I was used to the back of the bus.

As a young twenty-something, if I’d not been running on the go―out―booze― get―laid―booze―recover hamster wheel, I could have turned Squeezebox! into a true empire – like Ian Shrager did with his loot from Studio 54. There was even talk of SqueezeBox! Records – we certainly had enough bands to sign. There were side gigs at colleges in New Jersey and Vermont. Private parties in L. A. and Tokyo. Since the big Debbie Harry internet show in January ’96, she and Chris got back onstage, reunited Blondie, and their new single Maria took over the international airwaves. John Cameron Mitchell blew the roof off with Hedwig. Patrick had Psychotica so sewn up, Marilyn Manson copied everything he did. It was all a glittering, delicious mess. I was a mess. But maybe, that’s exactly how the twentieth century was supposed to end.

By mid-‘97 Clinton’s DNA was hardening on Monica’s blue dress, and the Republicans would try for years to beat him from office. On the streets, America followed the vibe. We either blew or beat each other. Over time, the cocaine, drug vibe, infighting and troubles with other underground clubs began to wear me out. People seemed to be shifting from going out to be fabulous ― like we did in the Big Apple to going out to get fucked-up ― like they did in suburbia. As homogenization trickled down, a lot of folks forgot they were living in the center of the cultural universe.

Most of the so-called ‘gay’ community loathed SqueezeBox! from the start, most likely because we were only queers. Just queers. None of us went to a gym, owned lycra, or had any inclination to ‘assimilate’. Local magazines wouldn’t run our ads. Other so-called alternative clubs made it nearly impossible for us to promote. Nobody played fair – not since the old East-Village-Pyramid-Black-Lips-DeeLite-Blackbox-Channel-69-Boybar-Wigstock- at- Thompkins-Square-Park days. Not since the fame bugs began to bite.

Contributing to the atmosphere of beige, Giuliani’s quality of life troops were hemorrhaging throughout the city. They’d harassed Coney Island High almost out of business. Some chick from Boston stood up at a community board meeting and whined because she couldn’t sleep in her newly renovated apartment located just above the Coney dance floor – which had been there twenty years. A bunch of yuppies and blue-hairs formed a group and named it ‘Save Avenue A Association’ – although Avenue A didn’t need saving unless you were a real estate developer. A really fun night during the week popped up at a place called Cake on Avenue B – and, of course, the quality of lifers set their sights square on it. NO DANCING signs popped up all over the city. Giuliani’s cronies found a 79 year-old cabaret law concocted to discriminate against Harlem jazz clubs in the Twenties’, and were now using it to discriminate against Manhattan queers, trannies, hip-hoppers and ethnic parties in the boroughs. The city Fire Marshals were taken from protecting people against fires and put to harassing clubs with phony inspections at 2AM. Giuliani took the fireworks away from the Chinese New Year and sanitized Times Square so it would be just like home for all the squeaky tourists who apparently ached for more Disney in their lives.

To me it looked like every city agency was to be stacked with henchmen, and Giuliani’s culture war didn’t stop with nightlife or entertainment. He was forcing community libraries to close; museums to cut back hours. All over town, historic landmarks like the Palladium Theatre were falling to the wrecking ball. NYU was allowed to run rampant through the East Village – buying up every piece of property it could get its dirty purple hands on. Thousands upon thousands of arrogant, binge- drinking, yuppie adolescents were being herded over the rivers and into our woods to enroll for thirty-grand a year at NYU ― a university originally founded to educate poor inner city kids. Mommy and Daddy back in Cleveland, Fort Wayne and Nashville took out second mortgages and sent junior to New York City so he could pretend to be trendy and complain about things.

Winks, nods and blind oversight camouflaged the biggest case of housing fraud in city history. Rent regulations and housing department codes were ignored; inspectors paid off.Had to have been. How else could landlords turn seven-hundred- a-month tenement shit-holes into fifteen-hundred-a-month ‘Renovated Sunny Apartments’ with a cheap coat of paint and forged paperwork?

My hunch was that Giuliani did it for spite first, profit second. He acted like a spoiled, overgrown teenager who probably never got picked for the baseball team, probably grew up with Mommy as his only friend and probably never got laid until he was a sophomore in college―and even then had to pay for it. Now, the rest of us were paying for the mercy fuck he never received. Rat. Funny thing was, if he’d lowered he’d have calmed down for a minute or ten, he might have discovered real friendship in the very misfits he sought to destroy.

For similar reasons, I resented other club ‘rainbow’ promoters who used the same kind spin to crown themselves the new Kings and Queens of nightlife. Too many folks like my friend Haoui, who knew the real score, were gone. Because of AIDS, the credit for almost everything noteworthy on the downtown scene since Studio 54 was up for grabs ― and the bottom-feeders began grabbing like Rudolf, who grabbed the credit for the drop in crime. ‘He cleaned up New York…’ said the news media and salesmen from Kansas City. Bullshit. Crime dropped everywhere because Clinton had balanced the budget and people had jobs to go to. My take on all this: Giuliani cleaned up for his pals, petty club promoters pocketed the proceeds of mediocre nightlife, and the whole fucking thing gave me a migraine.

So what’s a boy to do? Go out, booze, get laid, recover. Repeat. Until he somehow fights a hole in the side of his paper bag. And aside from any criticism that the politically-correct naysayers could hurl, at least me and mine were at the pinnacle of our game. Collectively we were prettier, smarter, uglier, hornier, and more glamorous than any other group in the whole tired, rotten city. We didn’t need to lip synch – we could sing. We didn’t need to search for stars, they came to SqueezeBox! on their own – through the same door as everyone else. Simply by existing ― boys in bikinis dancing next to the Steven Spielbergs of the world; trannies with new chests dancing with the naked Drew Barrymores of the world; homeless kids chatting over martinis with the Sandra Bernhards of the world; East Village drag queens like Misstress Formika, Lily of the Valley and Sherry Vine were singing duets with the Deborah Harrys and Marc Almonds of the world; Michael Schmidt was creating fashion with the JFK Jrs of the world ― for a brief moment on the grand scale of life, we were the world – and many would go on to put a chink in the bourgeoisie armor well into the 21st Century.

Me? I’d managed to climb from the foothills of North Carolina upstage to the hottest NYC scene since Max’s Kansas City. In my teen-hood Debbie and folks like Freddie Mercury came through my hi-fi stereo console with stuff like dreamin’ is free and don’t stop me now. And I believed every word. I still do ― but I’ve learned beliefs come with a price. For now, in the familiar words of Sylvester, ‘let’s party a little bit…’